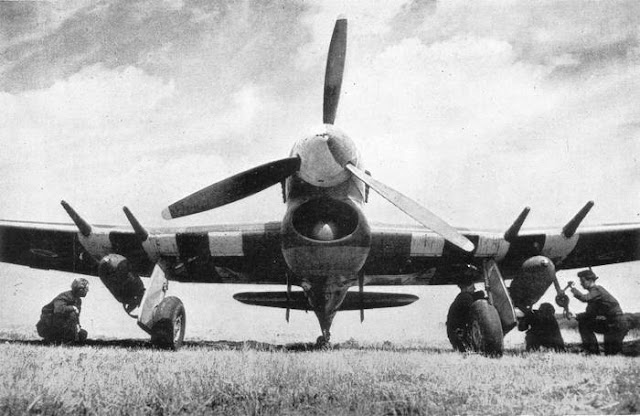 You might be forgiven for thinking the Hawker Typhoon was an aircaft of lesser historical importance, since it hasn't gained the wide spread reputation of those British/Commonwealth fighter aircraft which took part in the Battle of Britain, but the simple fact is, the Typhoon was an amazingly good aircraft, with excellent performance (except when it broke in half) and a dazzling record of achievement. 3,317 were built, with three variations, eventually taking the Typhoon design to the limit of what a piston-engined fighter could achieve. 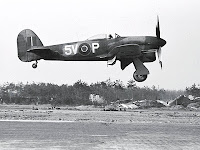 I've liked the Typhoon ever since I was a boy and saw footage of Typhoons flying at extreme low level over the French country side. There is something about their form and power that conjures up a mental image of god-like beings moving across the face of the world in heavenly chariots, but maybe thats just me. I do have a weakness for ground attack aircraft though, and even though its not twin engined, the Typhoon fits right into my constellation of favourites.

Oh yes, the Typhoon, the Jabos that created the "German stare" towards the sky...

Often followed by the Teutonic sprint...

...agreed... they just look immensely powerful.... Typhoon and Mosquito - two of my favourites

Oddly the Tiffy's Tommy's favourite aircraft and the first we built and painted together.